Your benefits with an Una Mattress™:

Choose a non-toxic latex mattress with adjustable firmness, to find the perfect fit for you, or your family.

Only the finest natural organic certified materials — no chemicals, fire retardants, or microplastics. 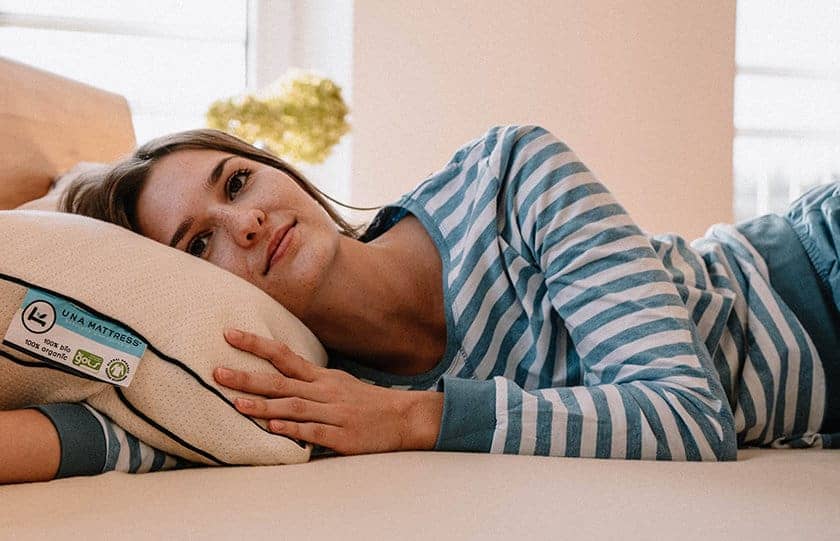 Our non-toxic mattresses are made from 100% natural and organic latex foam — a healthy, natural alternative to man-made mattress fillings like memory foam. Our natural latex is collected from rubber trees and developed into mattresses using eco-friendly manufacturing techniques.

We have paid careful attention to each element of our chemical-free mattresses to ensure they are organic and eco-friendly from top to bottom. As well as natural latex, we work with chemical free cotton, wool, and other natural fibres. If you’re looking for a non-toxic mattress which is comfortable, healthier for you and your family, and sustainably made, look no further!

What is a non-toxic mattress?

Non-toxic mattresses are mattresses that are manufactured without the inclusion of any toxic materials. They have been designed to offer a healthy mattress alternative to ones made with synthetic fillings, which can have a negative impact on the environment, as well as the person sleeping on them.

Synthetic mattresses, and ones manufactured with man-made materials like memory foam, often contain chemicals that can be released into the surrounding environment through a process known as ‘off-gassing’. These chemicals can be part of the composition of the materials used, or be added to make the mattress more flame-retardant, for example.

Non-toxic mattresses are made using entirely natural, organic and sustainably sourced materials. Una’s collection of chemical-free, natural latex mattresses have all the benefits of memory foam, without any of the harmful additives and due to the natural compounds found within latex, there are a number of benefits to be had.

What are the benefits of a non-toxic latex mattress?

Natural, non-toxic latex mattresses are manufactured without any of the added chemicals or fire retardants mentioned above. We make our chemical-free mattresses with materials that are found in nature, they are typically healthier and safer for you and your family to sleep on.

Latex has a number of properties which make it perfect for mattresses, such as being naturally hypoallergenic, antifungal, and antimicrobial. This means that latex is highly resistant to mould, and its tight cell structure also makes it uninhabitable for other nasties.

For instance, dust mites thrive in traditional sprung mattresses because of their open-air spring system and loosely constructed layers. However, the solid foam core of a natural latex mattress is a natural dust mite deterrent. This helps to create a healthy, allergen-free sleeping environment, allowing you to sleep better and feel better.

Why buy an Una Mattress?

Una mattresses are made with natural materials only — including organic latex foam, as well as organic wool and cotton. Our non-toxic mattresses are 80% more breathable than those made with synthetic foam, and we use no glue or adhesives of any kind — just high-quality stitching and production.

We pride ourselves on using traditional mattress-making techniques, so that the quality of the final product is equal to that of the materials we use to make them. Because of this, our healthy mattresses are long-lasting, do not lose their shape and provide superior comfort and support to your back.

Latex foam also helps to support proper spinal alignment as you sleep by distributing your weight evenly across the surface of the mattress and conforming to the natural shape of your body. The soft, cotton cover is cool to the touch and highly breathable, whilst the mattress’s natural ventilation maintains a fresh sleeping environment.

As we use no unnecessary chemicals or toxic materials, there are no chemical odours and no chance of off-gassing harmful chemicals around your home. The goal of Una Mattresses is to help you sleep fresh, in a way that is sustainable for you, your family and the planet.

You can shop our full range of chemical-free latex mattresses, including baby and junior size mattresses, at our online mattress shop.

Unlike non-toxic mattresses, standard mattresses can contain a variety of chemicals — many of which are not harmful, but in large amounts have been known to have negative effects. You may have opened up a mattress and experienced a very strong smell. This is likely to have been from chemicals and materials used in manufacturing.

Toluene or Methyl benzene, a hydrocarbon most commonly associated with paint thinners. Prolonged exposure to this chemical has been found to trigger asthma in some people, and even to affect developing foetuses in utero.

All these harmful chemicals can be absorbed into the environment, or even into your skin through mattress covers. Depending on the strength of the chemical, this can lead to skin irritation and rashes, as well as more serious conditions. Fire retardants in significant quantities have been linked to learning deficiencies, memory loss, cancers, organ damage, birth defects and even sudden infant death syndrome (SIDS).

Other harmful chemicals used to make mattresses fire retardant are; Vinylidene Chloride, Bromine, and Formaldehyde which between them are responsible for skin irritations and discolouration, burns and blisters, ulcers, symptoms of drunkenness, blurred vision and eye damage, lung congestion, liver and kidney damage, tumours, pulmonary oedema, pneumonia, convulsions, and diarrhoea.

Although these are extreme examples, it is always best to investigate the mattress you are going to purchase. If you’re concerned about negative effects from flame retardant chemicals, a natural or organic mattress may be the best choice for you.

For more information about flame retardant chemicals and other bedroom hazards, feel free to visit our article about the benefits of choosing an eco-friendly mattress in 2021.

What else could a standard mattress contain that I should watch out for?

It isn’t only chemicals and bacteria that can be sneakily concealed within our mattresses. It may not bear thinking about, but standard mattresses can fall prey to a couple of unwelcome visitors in the form of insects.

Bed bugs are small, flea-like insects that can make their home in the crevices of mattresses, the filling, or even in your bed frame. Like fleas and lice, they bite and feed on humans, and the first sign that you have them may be once you notice a bite — by which time it is often too late!

There are a number of pesticides and methods that can be used to purge bed bugs from your sleeping environment, but it can be a long and difficult process to remove an infestation. It can certainly be done, but for your peace of mind, you may choose to opt for a new non-toxic mattress made with a natural bug repellent.

Dust mites are far more common than bed bugs, and less harmful. They are tiny, spider-like creatures that are less than one millimetre in length and feed off dead skin cells left behind by humans. This makes mattresses an ideal spot for them to live.

A single gram of house dust can contain up to 100,00 dust mites, however they are relatively harmless. However, their waste can be irritating to people who have allergies or are sensitive to dust. An allergic reaction to dust mite faces can leave you struggling to sleep and seriously impacting your wellbeing.

Figures from the American Lung Association suggest that between 50 and 80% of all asthma and hay fever cases are triggered by an allergic reaction to dust mites. However, the American Academy of Allergy Asthma and Immunology (the AAAAI) recently concluded that mattresses made from natural materials are far less likely to cause allergic reactions than those made from synthetic materials.

The close texture of latex mattresses make them hard to inhabit for both dust mites and bed bugs, whilst the material is naturally hypoallergenic. Our chemical-free mattresses can be a great option for those with allergies, and feel free to visit our article on the subject if you would like to learn more about purchasing an allergy-safe mattress.

Which mattress is right for me?

" Best mattress ever. Very comfortable and great that you have the choice of soft, medium or hard and easily able to change them around for each side. "
Jenny C 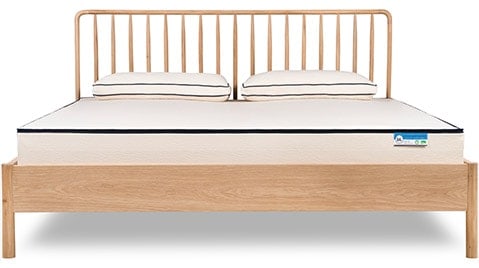 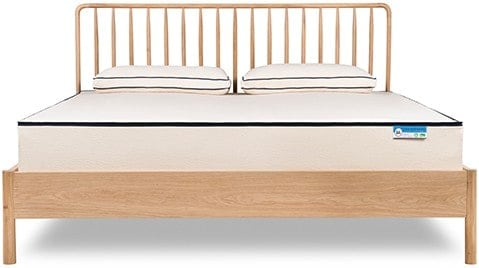 "Brilliant mattresses, firm yet forgiving, much more comfortable than so-called memory foams or contour-hugging mattresses, and they just FEEL great... they have that X factor that makes you really enjoy lying on them." - Kevin H

"Without doubt the best thing I have purchased in decades. This is money well spent. The mattress is so comfortable, and it feels just as heavenly to know it is made from such amazing materials. Amazing team at UNA too. Thank you so much; I love it and so does my sleep." - Kate

We use cookies on our website to give you the most relevant experience by remembering your preferences and repeat visits. By clicking “Accept All”, you consent to the use of cookies.
Cookie SettingsAccept All
Manage consent

This website uses cookies to improve your experience while you navigate through the website. Out of these, the cookies that are categorized as necessary are stored on your browser as they are essential for the working of basic functionalities of the website. We also use third-party cookies that help us analyze and understand how you use this website. These cookies will be stored in your browser only with your consent. You also have the option to opt-out of these cookies. But opting out of some of these cookies may affect your browsing experience.
Necessary Always Enabled
Necessary cookies are absolutely essential for the website to function properly. These cookies ensure basic functionalities and security features of the website, anonymously.
Functional
Functional cookies help to perform certain functionalities like sharing the content of the website on social media platforms, collect feedbacks, and other third-party features.
Performance
Performance cookies are used to understand and analyze the key performance indexes of the website which helps in delivering a better user experience for the visitors.
Analytics
Analytical cookies are used to understand how visitors interact with the website. These cookies help provide information on metrics the number of visitors, bounce rate, traffic source, etc.
Advertisement
Advertisement cookies are used to provide visitors with relevant ads and marketing campaigns. These cookies track visitors across websites and collect information to provide customized ads.
Others
Other uncategorized cookies are those that are being analyzed and have not been classified into a category as yet.
SAVE & ACCEPT